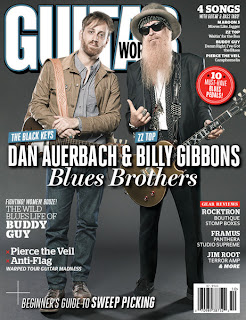 Billy, you’ve been eyeing the wall of about 600 albums in the studio’s office, and Dan, you’ve kept discs spinning since Billy arrived…

GIBBONS: If we can address the value of vinyl… Upon entering Dan’s Easy Eye Studio, I was drawn immediately to the Macintosh tube amp and the turntable, and it was in the groove. The rawness and the richness of music on vinyl almost went away, but it still seems to be on a lot of people’s radar, and for good reason. It does something different than more accessible means of music playing, like MP3 players and downloads and whatnot. You get in front of these archaic contraptions that go ’round and ’round. It’s mesmerizing, not only to look at but to sit back and experience. Wouldn’t you agree?

AUERBACH: Yeah, yeah. There’s nostalgia there, for sure, but it also sounds fucking great. Everything sounds really good on vinyl, if you’ve got a nice setup. I’ve got a bunch more albums at home. Billy, do you have a big vinyl collection?

GIBBONS: Oh yeah. Unfortunately, it had to be rescued. We were in England and I was notified to call my assistant, Denise. She said, “Well, there’s been a horrific rain storm and that flat roof of your condo sprung a leak. I was retrieving the mail and I saw something that looked like a garden hose spraying straight into the room.” She called the handyman and they were able to put the valuables aside, but part of the rain went right into a column of vinyl.
Water doesn’t hurt a vinyl record. Put it into a dishwasher and you’re fine. But the paper began to mold and my secretary, being rather protective, decided it was unsafe and threw them all away. I was able to rescue several garbage bags. It was just one column, but it happened to be a column of favorites. I ordered up a bunch of plain white sleeves to put them in and they were fine.
What are some of your favorite titles on vinyl?

GIBBONS: I’ll turn one track into a two-hour listening session. It’s that obsessive thing. I share it with Dan—the passion and obsessiveness that can enter one’s pathology when it comes to vinyl and tubes and all this crusty stuff. I have a longstanding buddy who is a true audiophile and has invested a lot of time and money, to the point where he bought a platform that was invented to stabilize electron microscopes from the rattling as the Earth spins…

AUERBACH: The rattling of the Earth’s rotation? [laughs]
GIBBONS: It was causing this low-end rumble that he was able to perceive. Given the power of an electron microscope—and at 100,000 times magnification, it better darn well be stable or it’s going to be very fuzzy—he decided that if he put one under his turntable it would be a little more precise.

AUERBACH: Shit. Just have one of those built into the soles of your shoes. Check this out… [He pulls another single out of a case.] Here’s Hound Dog Taylor’s very first 45, before he had his band the Houserockers: “Christine” backed with “Alley Music,” on the Firma label.
Pubblicato da BLUESSURIA a 01:18 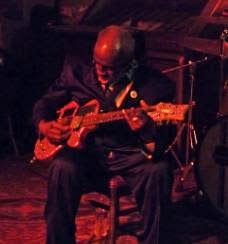 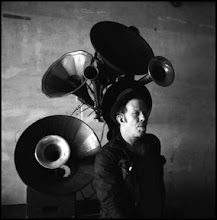 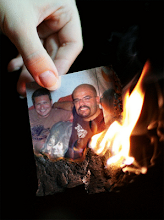